What is D-GPS and how does it work?

What is D-GPS and how does it work?

Differential Global Positioning System (D-GPS) is an advanced version of Global Positioning System (GPS) which has improved location accuracy, within its operating range. The range of the system is 15 metre (49 ft) to around 1-3 centimetres (0.39 – 1.18 inch) in the case of best implementations.
Each D-GPS implementation uses a network of fixed ground reference stations. The ground-based stations broadcast the difference between GPS satellite indicated positions and known fixed positions. The stations broadcast the difference between the measured satellite ranges and actual (internally computed) ranges. Receiver stations can correct their ranges by the same amount. A digital correction signal is broadcast locally over ground-based transmitters of shorter range. Many countries have their own versions of D-GPS.
Wide Area D-GPS (WADGPS) is a similar satellite-based augmentation system which transmits corrections from satellites instead of ground-based transmitters.
There exists a reference station that calculates differential corrections to calculate its own location and time. Users can make use of the system up to 200 nautical miles (370 km) from the reference station. Some of the compensated errors vary with space such as satellite ephemeris errors and those introduced by the ionosphere and troposphere distortions. Therefore, the accuracy of the D-GPS system decreases with distance from the reference station. The problem can increase if the user and the station lack visibility to see the same satellites.
D-GPS can refer to any type of ground-based augmentation system. There are various operational systems in use throughout the world. 47 countries make use of this system for example by the coast guard.
D-GPS makes use of post-processing to obtain precise positions of unknown points by matching them to known points such as survey markers. The measure GPS points are saved in computer memory in the GPS receivers, and are transferred to a computer running the GPS post-processing software. The software is capable of computing baselines using measurement data from two or more GPS receivers.
A three-dimensional line is drawn between the two points occupied by each pair of GPS antennas to represent a baseline. In post processing software the measurements allow a more precise positioning. Most GPS errors affect each receiver equally, and therefore cancel each other out in calculations.
D-GPS measurements can also be computed in real time by some GPS receivers. This is possible if they receive a correction signal using a separate radio receiver, as in the case of Real Time Kinematic surveying or navigation.
GPS accuracy does not require simultaneous measurements of two or more receivers, instead can be completed using special use of a single device. A few decades ago, when even handheld receivers were quite expensive, special methods of D-GPS were developed, using the receiver by quick turns of positions or loops of three – ten survey points. 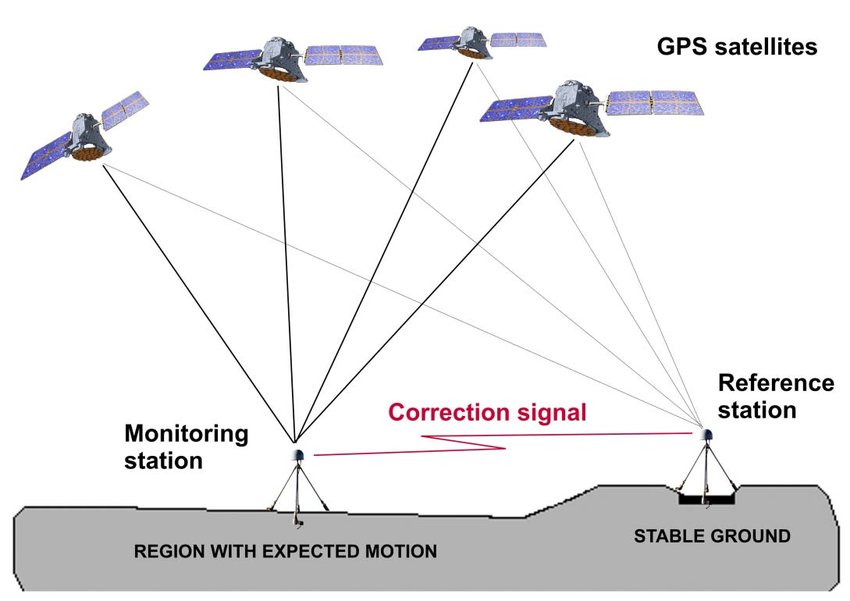