Drones are using ArtificiaI Intelligence and Edge Computing to detect problems before they occur. The standard way to keep assets operational is by routine or preventive maintenance. System failure can be avoided by inspecting and replacing components as they wear out.
On the other hand, predictive maintenance is gaining popularity. Rather than using set time intervals for maintenance, degrading of parts is estimated and maintained before being worn out. This method uses AI along with IoT to detect problems before they occur.
In areas that are remote and difficult to access, predictive maintenance is being assisted by Drones or unmanned aerial vehicles (UAVs). Artificial Intelligence (AI) and Internet of Things (IoT) are common tools used when automating predictive maintenance. Data collected from components can be analysed by organizations using IoT. Assessments can be made with the use of AI which has learned how to detect the state of components.

Drones can help get the job done in remote locations or in places that are otherwise difficult to access. Solar farms cover large areas and it is neither convenient nor cost effective to send people to perform maintenance. Panels with sensors can alert to potential problems but through predictive maintenance, defects are being detected much sooner.
The solution entails using drones with cameras, hardware and GPUs which can visually inspect the solar panels for accumulation of dust, corrosion and degradation. An accurate assessment is made using AI’s deep learning, a neural network that can distinguish between healthy panels vs faulty panels. Drones send data to the ground station which decide if a panel needs attention. Data is filtered out at the drone level before being sent to the ground station in order to avoid a lot of redundant data.
Each solar panel’s GPS coordinates are recorded and work crews are sent to address the fault when it is detected.

The condition of the assets will be analysed by way of machine learning using drones equipped with high resolution cameras and processors. The necessary cations will then be determined. In other applications such as agriculture, drones are helpful to manage work on large farms. Crop health can be monitored through aerial data along with ground work.
Inspections on wind turbine blades have also changed by using drones. The maintenance was previously performed at high risk by human scaling great hights to observe the wind turbine blades. Drones are capable of using imaging to detect potential damage, even at the subsurface level, thus greatly assisting in maintenance.
New ways of maintaining assets have been made possible through the use of sensors, connectability, machine learning, Internet of Things and Artificial Intelligence. Drone technology now has the ability to pre-process information. This trend is going to continue and we should see more of these modern solutions especially in industrial applications. 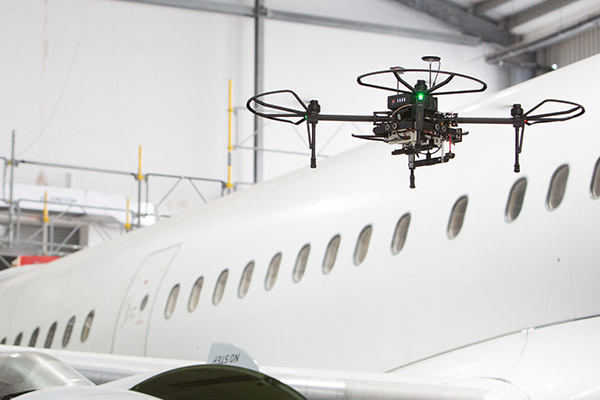